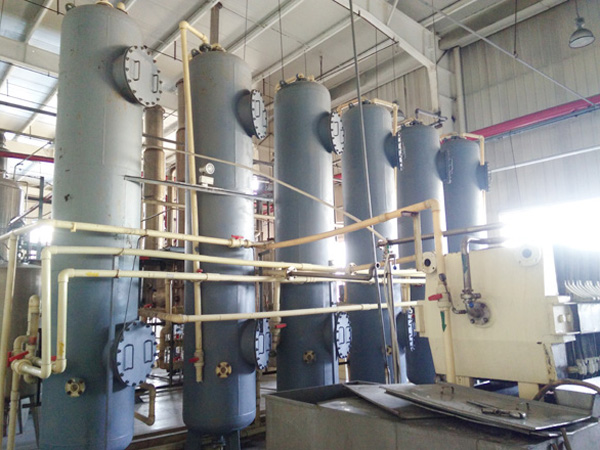 First of all, about the glucose production technology, mainly can divided into three parts:

As we all know, starch is the raw  material used for glucose syrup production, and the feedstock for production of glucose in plants requests the starch milk reach a purity ranging from 98-99% pf starch in dry substance. So the first step is mixing starch with water in special tanks, homogenize starch slurry then complete the raw material preparation.

The conversion process from starch to syrup is carried out as a two-step enzymatic process.

(1) In the liquefaction step, the starch slurry is treated with enzymes and fed to a jet cooker, where the starch is pre-liquefied for the production of glucose in plants. This solution is cooled down in an expansion vessel and placed in an intermediate storage tank for final liquefaction.

(2) In the saccharification tanks, further enzymes are added to convert the dextrin into glucose and minor amounts of higher sugars (maltose, isomaltose, maltotriose etc.) for production of glucose in plants. By carefully adjusting the process parameters, DE values of up to 98% can be reached within 30–60 hours for saccharification time cost.

For the isolation of suspended particles such as fibers and proteins, kaifeng sida offers a broad range of filtration technologies. State of the art polymer, sintered metal or ceramic cross flow membranes can be employed with the aim to recover the separated solids as a valuable animal fodder. Filter press, drum filter, etc are widely used for the production of glucose in plants isolation process, to seperate the impurities out.

Further purification of the filtered solution is done in a pair of strong acidic and weak basic ion exchang column. Color bodies and foreign tastes are reduced to a minimum by activated carbon treatment. This is done either by passing through vessels filled with granular activated carbon or by suspending and subsequent filtering of the activated carbon powder. This consists of the purification part in the production of glucose in plants, main machines adopted is plate frame filter press and ion exchange column.

To concentrate the solution, a finely tuned system of multiple effect plate type or falling film evaporators is deployed. It is heated by steam and powered by mechanical or thermal vapor re-compression, thus ensuring utmost energy efficiency in combination with minimal thermal stress for the product. In the production of glucose in plants, we have several types syrup evaporator can manufacturer for you, we will suggest you the most suitable one according to your requests.

For glucose syrup production processing machine, it is enviroment friendly, no pollution. We apply dry method to transfer corn and rice flour...